Andrea Stramaccioni’s ascent started provincially in his home town of Rome, before he climbed through the ranks at AS Roma and then moved to the coaching position of the Inter Milan Primavera (Under 19s). Victory in the inaugural NextGen Series at venues as glamorous as Griffin Park and the Matchroom Stadium saw him elevated to head coach of the first team and he has yet to look back.

There is a touch of the magic dust about Stramaccioni and something serendipitous about the meeting with Juventus in the much-revered Derby d’Italia this weekend. On the day his Primavera side toppled Ajax on penalties to claim the NextGen prize, Claudio Ranieri watched his Inter team meekly surrender 2-0 at Juventus Stadium and departed Turin the day after. On Sunday, the Nerazzurri head west to face the Italian champions for the first time under new management.

Initially seen as something of a stop-gap to bookend a season that had already watched two managers try and fail to evolve an ageing Inter team, Stramaccioni did his credentials no harm, winning five of his nine games, (and all four of his matches at Giuseppe Meazza) including a 4-2 victory in the Derby della Madonnina – ending AC Milan’s hopes of retaining the Scudetto.

The 36-year-old was handed the keys to the castle by Massimo Moratti and has shown an admirable quality in turning a team in transition from old to new, to a legitimate Serie A contender. So far this campaign, Inter have won eight of their 10 league matches, including their last six, leaving them just four points behind Juventus. Unconventionally, their two defeats have come on home ground, and both by a two goal margin. Is it a question of mental fragility or simply a team adjusting to a host of changes?

Whatever the answer, Inter travel to the first Derby d’Italia of the season in buoyant spirit. They have won every single game on their travels in 2012-13 – eight wins in all competitions – a remarkable statistic and one that should provide more than a token threat of an upset for Antonio Conte’s side.

The Bianconeri have hardly let up this year either. Unbeaten in their opening 10 matches, their record of 49 games without defeat is now just nine behind AC Milan’s all-time record of 58 games, achieved between 1990 and 1993. With Paul Pogba rescuing the Italian champions last night and ensuring they achieved their fifth home triumph – importantly keeping them four and not two points clear of their nearest rivals – the scene is set for a clash of enormous magnitude.

The hosts haven’t been defeated by Inter on their own patch for seven years, when Julio Cruz guided a superb header beyond Gigi Buffon for the only goal of the game. That was Roberto Mancini’s only success and a feat even Jose Mourinho and his Champions League-winning Inter failed to match.

Historically speaking, Juventus have a considerably better record in this fixture than Inter and will be looking to claim their 95th win (compared to 67 Inter wins), subsequently placing the club in a dominant league position. It is early to speculate, but going on recent strength, Juventus would not be far from an unassailable position should they take all three points this weekend.

But there is much to worry the Bianconeri: Stamaccioni’s Inter have only conceded one goal away from home in Serie A – and just two in total this season, while finding the net 19 times in those eight fixtures. They may have stuttered at home, but there are few better gatecrashers in Europe than Inter right now.

The caveat – there is always a caveat – is the quality of opposition the Nerazzurri have faced. They say you can only beat what is in front of you but it remains a telling statistic that every win on alien territory has been against a side occupying a position in the bottom half of Serie A. Pescara, Bologna, Chievo and Torino hardly strike fear into the heart of opponents and their nine wins from 40 combined games speak volumes. There is of course the anomaly of AC Milan – neither a real ‘away’ game for Inter, but nor a legitimate powerhouse this year. 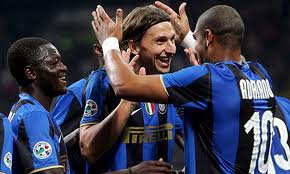 Inter have, however, blown their opponents away at times. There are fewer ‘smash-and-grabs’ and instead dominant displays – particularly as the season has moved on. There appears to be greater focus on the collective, a hunger and ambition to fight as a unit for victory, rather than days gone by where the individual brilliance of players like Zlatan Ibrahimovic or Wesley Sneijder would be the difference between victory or defeat.

And thus, Stramaccioni has utilised his squad to effect, drafting in 23 players in the league so far. It is a sign of the times – a tinkerer with purpose, not just in name only (looking at you, Mr Ranieri). Speaking to reporters after their hard-fought 3-2 win over Sampdoria on Wednesday night, Stramaccioni explained: “We had to continue our growth. If I spared players who had been putting in good performances recently in view of Saturday’s game against Juventus, then I would have been giving the wrong signal both to my players and to the atmosphere.”

This is a man that recognises the value in each fixture, someone whose fallibility has yet to be pinpointed. When his team struggled, 1-0 down at the break, he turned to his bench – introducing Esteban Cambiasso at half time before Yuto Nagatomo helped inject further purpose. Despite a late Eder goal, Inter found the solution, leaving Stramaccioni purring about the strength of his squad. “We brought on quality, anger and desire,” he added.

On any normal day, travelling to Juventus Stadium is a test, the biggest in Italy these days, but this fixture threatens to unravel much more than the Scudetto credentials of both teams. If Juve succumb to Stramaccioni’s Inter, it really will be time to sit up and take notice of the almost vertical ascent of the 36-year-old prodigy.

For someone who played professional football until he was 41, the prospect of adding another year to the tally must register fairly low in his list of concerns. Pietro Vierchowod turned 53 on Friday and the man once described as ‘an animal’ by Diego Maradona had a career worth recalling. Suitably I’m here to take a compact look at the accomplishments of the man known as ‘Lo Zar’.

The source of the majority of my early football interest came via the much-cherished channel of Football Manager and it’s various iterations. The Italian leagues were introduced in 1996 and a 35-year-old Vierchowod was patrolling Milan’s squad. The thing that stood out was his surname – it didn’t match his Italian nationality. A sweeper too? Not many of those specialists existed within the game. He was an intriguing entity and when I discovered him knocking about as a free transfer five years later, it was obvious that this was a man worth knowing.

The son of a Ukrainian Red Army soldier (hence the ‘Zar’ nickname), Vierchowod’s sterling reputation owed as much to his longevity as his achievements in both club and national football. In a career that spanned 24 years, racking up a mighty 647 club appearances he managed to squeeze in two Scudetto’s, a Cup Winners Cup, four Coppa Italia’s, a Champions League and a World Cup.

Standing a short 5ft 11ins for a centre-half but with a unique turn of pace that elevated him above his defensive peers, Vierchowod bridged two Italian eras, adapting admirably to the changing tactical worlds thrown at him. Initially a classic ‘stopper’, Vierchowod forged his reputation as a fierce man-marker – a vital line of defence in the Catenaccio systems that had started to disperse in the 80’s. As Italian football cast off the shackles of the defensive model that continues to stereotype the reputations of Serie A clubs, Vierchowod became one of the few defenders of the time to span both the 80’s and 90’s with his reputation intact.

Asked who was his toughest opponent was Gary Lineker spoke of the defender: “Vierchowod. He was absolutely brutal and lightning quick.” 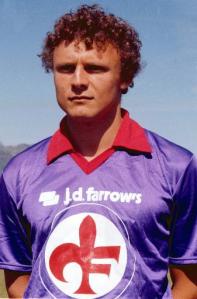 He began his career at Romanese in Serie D, making three appearances in the 1974/75 season though his first notable employer was Como in the north of Italy, where he spent five years. The 1978/79 campaign saw him establish himself at the heart of the defence and attain successive promotions from the third tier. Back in Serie A, Como gave him the platform to display his talents and halfway through their two year stay in the top flight he moved on to Sampdoria. He was taken to the Luigi Ferraris by oil tycoon Paolo Mantovani but given two years in Serie A with Fiorentina and Roma. His first year at the Viola was a success and saw the club finish just one point behind Serie A winners Juventus in second place.

Vierchowod’s impressive campaign encouraged Azzurri boss Enzo Bearzot to take him as an unused member of the Spain ’82 squad where he would go on to collect a World Cup winners medal. The following season saw his stock rise further as he helped his new club Roma capture the Scudetto for only the second time, keeping 17 clean sheets and winning the Italian Player of the Year award. 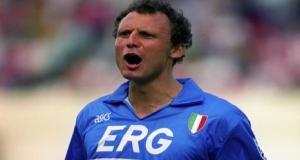 In 1983 he finally moved back to his parent club, Sampdoria, where he would further enhance his standing in the game. The ‘Zar’ nickname not only alluded to his heritage but his influence on the pitch and in the dressing room. He would go on to appear for Sampdoria 358 times in Serie A and helped lead them to their first and only Scudetto in 1990/91. He won four Italian Cups, won and finished runner-up in the Cup Winners Cup as well as a runners-up finish in the European Cup in this time.

By now, Vierchowod had competition in the form of the great all-Italian Milan back-line of Paolo Maldini, Franco Baresi, Alessandro Costacurta and Mauro Tassotti. The formation of one of the greatest defences in Italian history saw the same chemistry often supplied to the national team and as such Vierchowod never secured a permanent place in the starting line-up. That said, he did acquire 45 caps – further testament to a distinguished standing in the Italian game. He was also part of the 1990 World Cup squad that finished third. 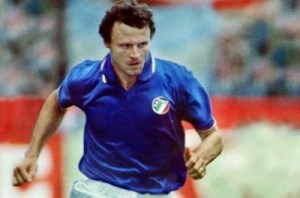 During his time at Sampdoria, Vierchowod adapted his game and became a more forward-thinking defender, often winning possession and surging from the defensive line, helping to launch counter-attacks.

To draw a modern comparison, Phil Jones’ style of play is reminiscent of the dynamism Vierchowod had during his days at Sampdoria. The competitive spirit and vivacity that separates Jones from his generation did so for Vierchowod throughout the 80’s and 90’s. As well as playing alongside Gianluca Vialli and Roberto Mancini, Vierchowod also faced some of the most fearsome strikers in the world as Italian football attracted the likes of Marco Van Basten, Rudi Voller, Careca and Diego Maradona.

On Vierchowod, Maradona eulogised: “He was an animal, he had muscles to the eyelashes. It was easy to pass by him, but then when I raised my head, he was in front of me again. I would have to pass him two or three more times and then I would pass the ball because I couldn’t stand him anymore.”

Vierchowod left Sampdoria in 1995 at a time where you’d be forgiven for thinking his time was up. Quite contrary, he moved to Juventus and played in the Champions League final against Ajax, helping stifle the likes of Patrick Kluivert and a 19-year-old Kiki Musampa no less! He helped take the game to penalties and picked up a winners medal aged 37.

As his career wound down, he turned out for Milan in a final big-club swansong before settling down at Piacenza where he helped them battle relegation to Serie B for three seasons. As his physical attributes waned, Vierchowod operated as the sweeper in a three man defence. He famously said in 1999: “I used to be much quicker than everyone else – now I’m just as quick as them.”