Ferenc Puskas would have been 85-years-old today had he not passed away in 2006 and it seems apt to get a snapshot of the career of the man known as ‘the little fat chap’.

Puskas is arguably more renowned as the goalscoring inside forward for the Hungarian ‘Golden Team’ of the 1950s than one of many superstars plying their trade in the Spanish capital for Real Madrid in the back end of the 50’s. He achieved as much in (and with) his native country than he did with his adopted nation of Spain.

He played for the Hungarian team Kispest under two separate guises between 1943 and 1955. His father, also called Ferenc, appeared for Kispest in the 1930’s when the club was more of a village side before coaching the club in the 40’s. But it was the impact his son made on Hungarian football that was chronicled as legend. Puskas made his debut for Kispest AC in 1943 alongside Jozsef Bozsik – another of the future stars of the Golden Team – long before the club became synonymous with the politics of the nation.

The Communist rulers had long since recognised the potential of sport as a tool of propaganda and by 1949 decided to focus on the development of the national team. Unlike many other nations, it was decided that Hungary would follow the blueprint that led to the great Austrian and Italian teams of the 1930’s by adopting one club as a puppet for national team development. Kispest became that team and were led by Gustavs Sebes, who was also appointed the national team manager that year. Kispest became Budapest Honved or literally ‘Defenders of the Motherland’.

Honved had Puskas and Bozsik on their books already and once Sandor Kocsis reached conscription age in 1950, he took the option of moving to Sebes’ club over rudimentary army duties. They were joined by Zoltan Czibor, Laszlo Budai, Gyula Lorant and goalkeeper Gyula Grosics in the following year.

Here, Sebes effectively had the spine of his national team available all year round to mould to his style. Puskas and co. adapted to Sebes’ take on the increasingly antiquated W-M formation and employed it successfully for Honved and Hungary. 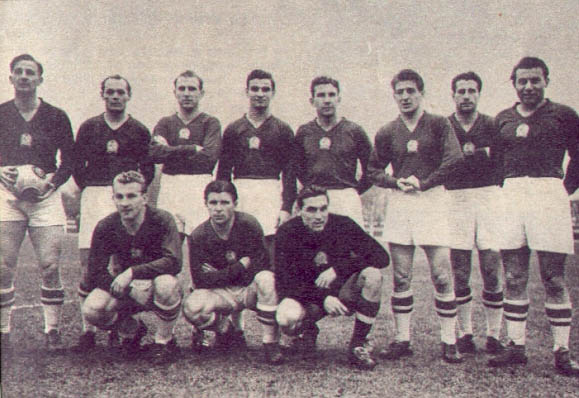 The 1952 Olympics gold medal winning side was the first true indication of the ability of the Golden Team. Puskas netted a relatively modest four goals in Hungary’s five games but crucially scored in the quarter-final, semi-final and final, ultimately claiming victory in a politically relevant clash with Yugoslavia. Puskas described Hungary’s success:

“It was during that Olympics that our football first started to flow with real power. It was a prototype of total football; when we attacked everyone attacked; in defence, it was just the same.”

“If a good player has the ball, he should have the vision to spot three options. Puskas always saw at least five.”

The following year, Buzanszky’s assessment was confirmed: 1953 gave rise to the game often referred to as the ‘match of the century’ – the 6-3 humbling Hungary dealt England at Wembley. Puskas, who netted twice, scored arguably the most famous of the six goals that day, collecting the ball on the right side of the box and dragging the ball back past England captain Billy Wright before slamming it into the goal. He also picked up an assist in a victory inspired by Nandor Hidegkuti’s hat-trick. The Magical Magyars had arrived.

A rematch the following year merely confirmed Hungary’s superiority as they trounced the English 7-1. These results came during a four-year spell of supremacy in which the Golden Team remained unbeaten for 31 matches. As the 1954 World Cup approached, many felt it would fittingly crown Sebes’ team as the finest footballing side in the world.

However, an early injury to Puskas meant he missed the quarter-final and semi-final and although Hungary defeated Brazil and Uruguay en route to the final, they lost 3-2 to the Germans in the final. Puskas featured in the final, and despite being judged unfit, scored what looked to be his second goal of the game:

“I got an equalizer right at the death but that Welsh linesman Griffiths…disallowed it for offside. Even the English ref Billy Ling had given it.”

The 1954 World Cup should have invigorated Hungarian football further but it did the opposite. Where there had been adulation for Sebes’ side following the 6-3 victory at Wembley, the defeat to Germany in Bern provoked so much anger in the Hungarian people that the returning team had to be protected by armed guard.

Between 1950 and 1956 Honved won five Hungarian league titles. However this success came before the introduction of the European Cup and, aside from glamour friendlies with the likes of Wolves, little activity was seen on the continent. The timing of the creation of the European Cup – a competition Honved would have been contenders for – ironically conspired to unravel this great side.

In the first round of the 1956 competition, Honved travelled to Spain for a clash with Bilbao. The timing was dreadful. The Soviet Union had invaded Hungary as the Revolution collapsed and the vast majority of Hungarian players used the opportunity to search for a way out of Hungary. The Honved striker Lajos Tichy said of the time:

“We hadn’t even had time to unpack our suitcases before we were surrounded by agents. There wasn’t a single player who didn’t get some kind of offer.”

After Honved toured Europe, many of the players found new clubs and indeed Puskas had searched for other options away from Budapest. After refusing to return to Hungary, Puskas was given a two year ban by UEFA, preventing him from moving elsewhere. During his time at Budapest Honved (and Kispest), Puskas scored a remarkable 352 goals in 341 games. 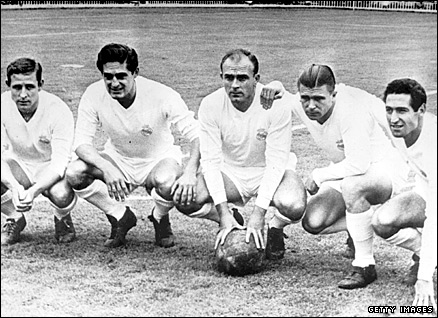 Despite that record, as the ban expired, his age (he was 31) and his size (hence ‘little fat chap’) put doubt in the minds of many of the top clubs. Santiago Bernabeu of Real Madrid, saw sense and snapped up the unattached Puskas, marrying him with the legendary Alfredo Di Stefano.

Their finest moment together came in the 1960 European Cup final as Madrid tore Eintracht Frankfurt to pieces in front of 130,000 people at Hampden Park in Glasgow. Although the Germans took the lead, Puskas and Di Stefano responded, scoring four and three goals respectively in a 7-3 rout that crowned the Spanish club European Champions for the fifth consecutive time.

In the eight years Puskas played for Madrid, he won five league titles and three European Cups as well as four Pichichi trophies for topping the goalscoring charts in Spain. He even made four appearances for Spain after becoming nationalised in 1961. In his time in Spain, Puskas scored 157 times in 182 games. For Hungary, his record stands at 84 goals in 85 games.

Though Puskas continued at Real Madrid until he was 39, there is something poetic to be taken from the ‘breathtaking ingenuity’ he showed in the 1960 European Cup final. Germany had denied the Golden Team their coronation in Austria in 1954, but Puskas’ brilliance ensured he did not suffer a repeat of such disappointment.